The October 2015 Visa Bulletin when announced on September 9 2015 seems to be “too good to be true”. Well in fact, it was because two weeks later on September 25 2015, the Department of State retracted its numbers leaving disappointed thousands of applicants mainly from India stranded in a morass of depression. Since then many have been fighting back including petition online, a lawsuit and media outreach.

Nonetheless at this point, the Department of State is not budging and is saying it is almost “futile” to resist. Having said that, it seems that t

here is a chance that the November 2015 will actually be better than expected which hopefully will cure the issues involved.

Our law firm which has been fighting for immigrant rights for years, calls on the government to actually fix the injustices which is making thousands suffer. We call on the DOS to look at those numbers not only as numbers but as coming human lives. Those who have already given a lot in terms of knowledge and creativity to the United States of America. As such we hope the November 2015 Visa bulletin will be an agreeable surprise. 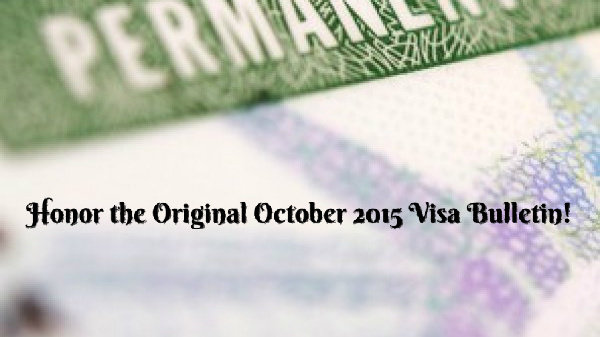 SIGN THE PETITION TO HONOR THE ORIGINAL VISA BULLETIN.